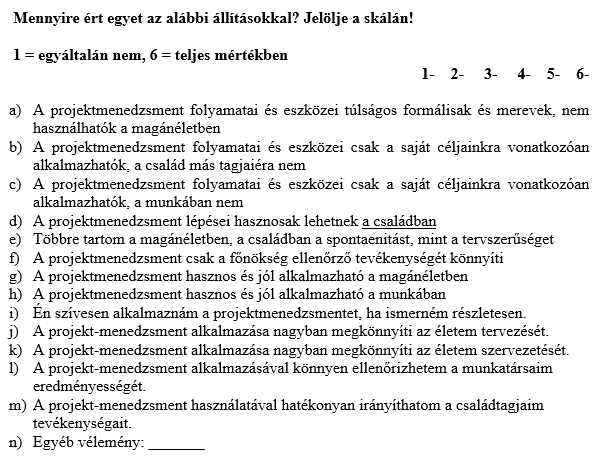 The research conducted as part of the project is fundamentally an identification process, since neither domestic nor Croatian research that serves as the comparison basis have extensive empirical analysis background.

The usage of project perspective and its practical application was researched using a self-made questionnaire. The biggest setback of the questionnaire method in this case is the lack of knowledge, or lack of precision in available knowledge, since those that don’t understand at least the outline of project work may be prone to answering positively when asked if “they use the methods and tools asked about in private life”. During the assembly of the questionnaire, we considered this hazard, and tried to avoid it by asking about more exact parts of PLM. If someone thinks they know and use project management steps when actually, they don’t, or aren’t, the following question – Do your written plans include deadlines for your specific goals? – will most likely get a No from them. The same debate lead us to the decision where the majority of questions included a scale from 1 to 6, since uncertainties, as opposed to such scaled questions, can only be answered by Yes or No.